See, we just had a Billy Joel moment there.

I rounded out this month’s Sweet as Pie picks with my pick, PW’s Sangria.  I really like sangria, and I’ve wanted to try this recipe since reading Pioneer Woman’s first book.  What’s better than summer sangria?  Here’s how it came together:

We cut this recipe in half since it’s clearly designed to serve a crowd.  Halved, I needed a bottle of white wine and a bottle of red wine.  Since I was going to be blending it all together, I took the less expensive route and bought two bottles that were on sale at Publix for around $8 each.

First, I chopped a green apple and sliced an orange, lemon, and lime.  I added that fruit, some red and green grapes, some pineapple chunks, and sugar to a pitcher. 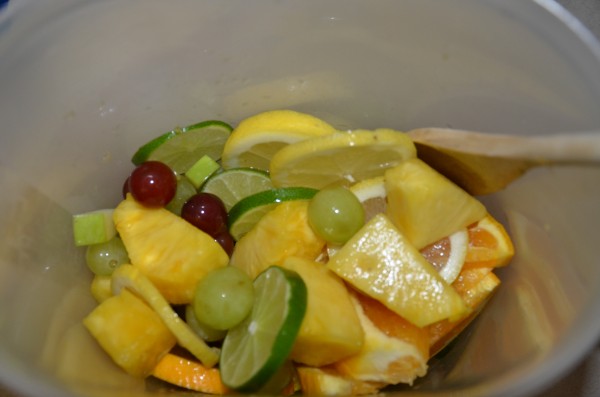 Then, I poured in both bottles of wine.  The recipe called for orange-flavored rum and orange-flavored vodka.  I actually didn’t have all of what I needed, but I did have a tiny bit of the vodka, so I added that and then a little plain rum.  I made up the difference in the liquid with some triple sec.  I decided to use what I happened to have on hand since (1) I don’t know where the ABC store equivalent is yet and (2) it was cheaper. 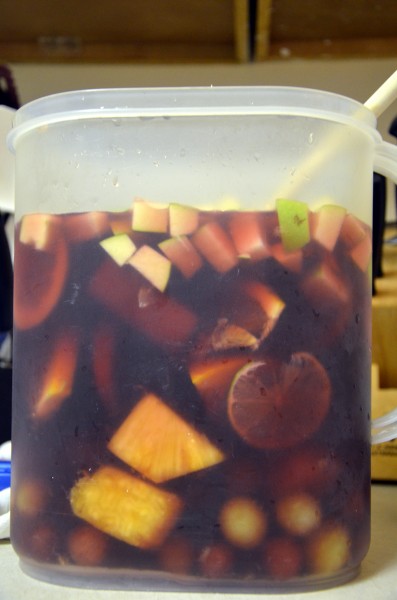 Be prepared to fish around for those grapes!

All in all, this was okay.  I loved all the fruit in this sangria – I’ve never had one with pineapple and grapes it in and I really liked those additions.  Unfortunately, I must be more of a light-weight than P-Dub, because this combination was a little much for me.  Once I added a couple of ice cubes and a splash of lemonade though, it was better.  It could have been my substitutions or my inexpensive wine, but I think I just really prefer my sangria a little less intense.  Maybe I should work on developing my own recipe?  Any other favorite sangria recipes out there?

**Update** Phillip wanted everyone to know that he actually really liked this sangria recipe.